Waking TO Doctrinal Amnesia?: Why the Trust Clause is Theology and What Will Happen if it Disappears

The 2019 called session of the General Conference of the United Methodist Church is underway. While the premise behind the conference--and the Commission that preceded it--involves maintaining as much unity as possible in a church with significant disagreements about human sexuality, much of the conversation of General Conference surrounds the concept of a "gracious exit." Before I talk about my significant concerns about this concept, let me offer a bit of background.

At present, all property is held in trust for the denomination by what is known as the "trust clause." This clause has, throughout history, kept many individual congregations and annual conferences within the fold of the United Methodist Church. As Lovett Weems reminds us,


Were it not for the property trust clause, virtually every white United Methodist church in Mississippi would have left the denomination in the 1960s. This is not hyperbole. It is reality. I was there. Today those churches are among 1,000 churches led by an African-American bishop that contribute significantly to the rich diversity of United Methodism.

"Gracious" or "graceful exit" is language that has been used to describe proposed legislation that would lower the threshold for a congregation or annual conference to leave the denomination (and in some cases, change the body responsible for approving such an exit). The thinking, as I understand it, is that whichever direction the denomination goes this week and beyond, there will be those unhappy with the direction and/or unwilling to remain United Methodist. A "gracious exit" plan would allow congregations or conferences to leave, either to become independent entities or to join with other congregations and conferences to form a new, autonomous denomination. While there are varying standards of how these congregations would leave (involving various thresholds for congregational votes and different amounts of money that congregations would need to pay to the denomination), the basic idea is that churches could leave the denomination by paying their share of unfunded pension liability, however such a thing may be calculated.


The Wesleyan Covenant Association (WCA), the leading group of traditionalists in the church, has argued that before any plans are discussed, the General Conference should vote upon a "gracious exit" proposal. What's more, the Traditionalist Plan and Modified Traditionalist plan both contain provisions that would allow congregations to leave the denomination. Others--including a coalition of traditionalists, centrists, and progressives--have argued for some level of exit or split, but the energy behind this movement is undoubtedly coming from the traditionalists, and in particular, the WCA; it's notable that the signers of the "United Methodists for a Gracious Exit" proposal include many of my own conference's most outspoken traditionalists. What's more, the Reconciling Ministries Network, a group which advocates for full inclusion of LGBTQ people, has issued a statement arguing against exit provisions, arguing that "LGBTQ-affirming United Methodists do not want to leave the UMC."

Given this context, I want to acknowledge my own deep reservations about any plan that includes the ability of a congregation or conference to leave the denomination. As Weems says,


It should be hard for a congregation to withdraw from their denomination. The burden of proof should be on those seeking to leave and take a congregation with them. After all, those interested in leaving have many other options for themselves among churches and denominations that share their beliefs and values, including some Wesleyan traditions.

It is true that "loosening" the trust clause--either temporarily or permanently--may sound like a convenient way to allow for relieving pressure on a denomination which feels that pressure in visceral ways. The problem is that in doing so, the church would do irreparable harm to the very embodiment of our unique theology of connectionalism and holiness: the trust clause.

One of Wesley's gifts is his ability to connect matters of faith to everyday life. While Wesley may have never used the phrase "personal and social holiness," these ideas are continual threads throughout his sermons and writings. What is more, Wesley's faith was an embodied faith, one that existed not only silently within the head and upon the heart, but one which had its expression in acts of care and compassion for others. Take a look at this sign, which hangs in the New Room in Bristol and describes Wesley's social commitments: 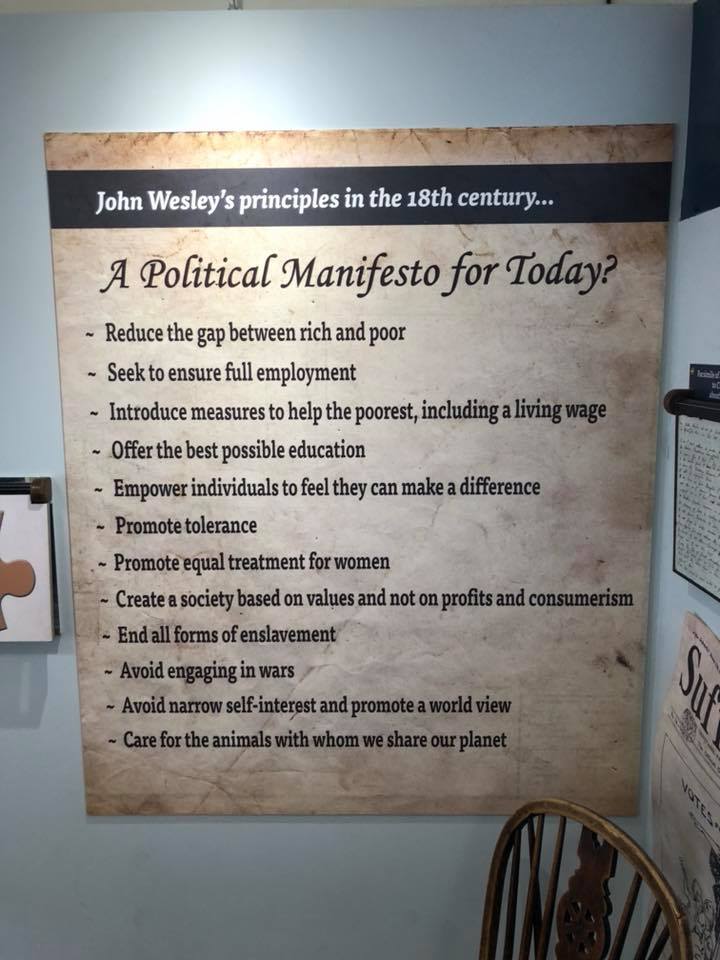 This list is hardly a narrow one, and it echoes many of the Social Principles which are to guide the lives of United Methodists. As the 2016 Book of Resolutions points out, "Such involvement is an expression of the personal change we experience in our baptism and conversion." My point here is that theology does not stop being theology when it exits the brain through the hands. Our theology is made manifest in the work we do and in the nature of the church--which itself does not exist apart from the inspiration of the Spirit. Wesley would call this work "fruit." The trust clause, then, is part of the work we do. It is part of our fruit. It is central to our understanding of holiness: that I love you too much to let you go, even when when we disagree. Our fruit is holiness! This does not mean that we try to be as pure as we can be. It means we are to be as loving as we can be.

This fruit is being challenged. While a number of the plans presented to the General Conference include exit provisions, I have deep reservations about each of them, completely independent of any theological issues surround matters of human sexuality. To undo or loosen the trust clause is to undo or loosen much of the core of our Wesleyan theology.

There are practical concerns. There are already law firms advertising with local churches who may consider leaving the denomination. While the case law has so far protected the denomination (and acknowledging that I am not a lawyer!), I have heard from attorneys connected with the UMC that any loosening of the trust clause will give room for increased possibility that the trust clause will be eviscerated in court, leading to what would essentially be the dissolution of the denomination. What's more, if a church votes 70%-30% to leave the denomination, does the exiting church receive 70% of assets, or 100%? This is hardly an issue of money and assets alone. Questions of unfunded liabilities remain, too.

And yet I am actually not that concerned with the practical concerns of loosening the trust clause. I am particularly concerned with the theology of all of it. Yes, the trust clause is made manifest in a legal arrangement, but at its core, it is among our most central and distinctive theology: we are all in the same boat as followers of Jesus, and when divisions and disagreements appear, we must figure out how to deal with them. To do any less is to fracture our witness as followers of Jesus--and children of Wesley.
--
Edit (2/25/19, 7:08am):

I had not seen this paragraph from GCFA related to the nature of the trust clause (you can see the original document here), but this sums it up nicely: