After nearly three years of waiting, we finally reached the day that the General Conference convened and we spent the day, well, waiting. I actually think that's a good thing. Each of us has been in prayer, individually, but we have not prayed together as a general church since gathering in 2016. A day of prayer and preparation was warranted.

My own day of prayer started at 4 o'clock in the blessed morning when something (honestly, I think it was the Holy Spirit) woke me up and told me to pray. So I spent much of the morning alternating between wanting desperately to go back to sleep and praying desperately that God would help us through this difficult time in the life of the church. I seem to be praying a lot of prayers of desperation lately--not that my life is in crisis, or even that Christ has somehow fallen off the throne. It just all seems so stuck. I have been remembering something one of my father's friends once told him: "if you ain't hurtin', your prayers ain't got no suction."

Even with waking up so early, I was almost late to the opening of the day of prayer at General Conference this morning. I just couldn't get myself out the door. I really think...well, no, I know...there's a part of me that just does not like having to walk into a situation that I know will be difficult. Does anyone like walking into difficult situations? Our conversation about the full inclusion of LGBTQ persons in the life of the church is often quite harmful, and when people I love believe diametrically opposed things about all of this, I struggle to find the energy to engage in conversation that I know will involve conflict. Conflict isn't bad, of course. It just hurts. So let's just say that it took me a while to get my socks on this morning. Before I left, I wrote a quick update to my United Methodist friends (and--especially--the churches I serve) on Facebook:


Arriving at General Conference proper is unusual, especially for an introvert like me. The room is full of people I sort-of know, though I often forget the place from which I sort-of know somebody. In our United Methodist world, there are also people we sometimes call "Metho-famous" which is to say people like me geek out when we run into them, but you wouldn't push past security to get an autograph or anything. The problem is that I sometimes can't remember if I know somebody because they're Metho-famous or because I actually know them. Such is the challenge of doing work in a large, diverse, and global denomination. I did get a chance to briefly catch up with old friends and with some pastors in other conferences I know and admire, which included taking a selfie with James Howell in the middle of a ridiculously long line (it was a kind gesture and made me feel like a million bucks). 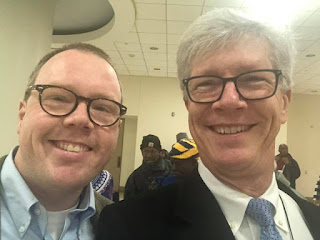 We spent the morning learning about the missional needs in various areas of the church: Eurasia, Africa, the US, and the Philippines. This may be a subtle point, but I really appreciated the fact that the conference specifically named the USA as a missional context. Too often, the church has behaved as if the US is the norm and everywhere else has a context; this fact is actually baked into the Discipline, which remains a problem. Today, we talked about the unique challenges of the US context, including the scourge of mass incarceration and the epidemic of gun violence. It was a reminder of the importance of the work we do as a church. It was also sobering. All of this makes me want the church to stay together to tackle these important matters.

I stopped by, during lunch, a presentation from the Uniting Methodists, an unofficial group hoping to maintain church unity by passing the One Church Plan. This was also a meaningful time of gathering, singing, and hearing stories. I wish we did more sharing of stories at General Conference. God does not act through arcane theology, after all. God acts through stories--through people--and the more stories we hear, the more we see God at work. 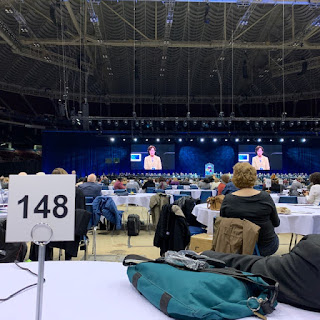 Speaking of God being at work, after lunch and one more missional context presentation, we entered into a time of directed prayer, and two particular acts of prayer stood out to me. First, Bishop Cho encouraged us to pick one simple word (I chose "hope") and to spend ten (whole!!) minutes in silence, meditating upon that word. I have done centering prayer before, and I have done silent prayer before, but I've never done centering, silent prayer in a room with so many people. I have to say, it was a powerful experience. And while ten minutes is a long time to essentially pray one word, I have to say, it was a peaceful experience, energizing even, and I was sorry when the time was up. The other act preceded our taking Communion, in which we passed the peace with one another and were encouraged to speak with others in our delegation, to ask forgiveness for any way we'd wronged them, intentionally or otherwise, and to offer forgiveness for the same. It won't surprise you to know that on the North Georgia delegation, we have quite a diversity of theological viewpoints. Sharing these moments of reconciliation really reset the tone in the room. It was powerful.

Beyond prayer, there were a couple of important things that happened today that could impact the direction of the conference. First, we learned that the conference has hired a professional parliamentarian to guide our work. He gave a detailed explanation of Roberts Rules of Order, which prompted this tweet from me:

In all seriousness, one of the things that has plagued General Conference is years past is complete lack of understanding about Roberts Rules. We can debate whether this is the best way to do church business (I would argue that it is not), but Roberts Rules has its place and actually protects the will of the minority. And if these are our rules, we need to live by them. So it was a helpful presentation. Once things get moving tomorrow, we'll see how we do.

The second important thing that happened was that the Council of Bishops announced that they were challenging two petitions which would (depending on your perspective) either increase accountability within the Council of Bishops or unfairly remove the discretion offered to bishops in matters of enforcing church discipline. Late this evening, the judicial council--working with remarkable speed--determined that these two petitions are, in fact, wholly unconstitutional. You can read the decision of the judicial council here. This is a big deal, as it goes to the heart of the enforcement mechanism of the Modified Traditionalist Plan. The rest of the Modified Traditionalist Plan remains essentially unvetted by the judicial council, and it certainly has a possibility of passing the General Conference, though it likewise has a chance of also being ruled unconstitutional. I'm not attorney--and I do not serve on the judicial council--but it seems likely to me, based on the rulings of the judicial council in previous sessions, that significant parts of the Modified Traditionalist Plan would be ruled unconstitutional if it were to be enacted. The One Church Plan, on the other hand, has requires only 3-4 small technical fixes to be entirely constitutional. The One Church Plan is the plan for which I am advocating, though mostly I am advocating for God to show up and surprise us all.

I said two important things happened this afternoon, but the truth is that three important things happened, at least for me. Back home in Atlanta, our six-year-old was running on the painted driveway of a relative, slipped, and busted her chin wide open. One trip to urgent care and six stitches later, she's fine, thank goodness. But this dad is feeling the preachers-kid-gets-hurt-while-dad-is-at-a-church-meeting-because-of-course-he-is guilt. 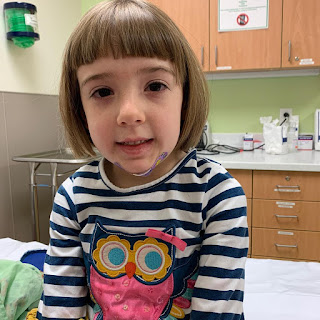 It's not yet 9pm here, and there are still events going on here in St. Louis, including opportunities to rally for the One Church Plan and chances to get to know some remarkable clergy and lay leaders better over dinner. But the truth of the matter is that I am all introverted out. So rather than push it too hard on the first day, I am off to spend some time in prayer and then I am off to bed. Our worship tomorrow begins at 7:30am, and then we'll start the work of prioritizing potential legislation to amend as necessary. I'll explain that process tomorrow, as it will involve an interesting set of legislative needs, including electing a chair for the 864-member committee of the whole. I hear that Connie Clark from the Tennessee Conference happens to be a state supreme court justice, so that seems like a no-brainer, but we'll see. In the meantime, as you gather for Sunday worship, remember those of us at General Conference--and pray that God might surprise us all.
Posted by Dalton at 10:00 PM