For several years now, I have considered myself an evangelical. I’ve not always thought of myself this way, but it is a term that does represent my upbringing in a nondenominational church. Now, I serve a denomination that considers itself to be both mainline and evangelical, which is a pretty find needle to thread.

And for several years, I have had to argue, at times, with those who do not believe I deserve to be called an evangelical. I was too focused on social justice, or I had too loose an understanding of Biblical interpretation, or my politics did not align with the Moral Majority, or I struggled too much with the idea of inerrancy: never mind the fact that I chose to go to seminary at Emory, where I would argue that the announcement of the death of God was quite premature.

I have also argued, at times, with those who claim evangelicalism as being little more than ascribing to a specific political platform or rigid set of doctrines; I believe evangelicalism to be a richer tradition than this.

In other words--and forgive the limits of these metaphors--are we called to be couriers or defenders? Yes, we are called to be both, but there is a sense in which each of these sensibilities runs headlong into the other.

As for me, I have a tendency to believe that being a courier requires more courage than being a desk-bound defender. A courier risks broken relationship, being labeled an almost-Christian. It is easy to hide behind a computer and accuse everybody else of being heretics. It is more difficult to go out and do the face-to-face work of making disciples.

But then, others would say that the army loses a whole lot more soldiers than UPS loses couriers. Faith requires limits, after all. I can still hear my seminary professor Luke Johnson reminding us that if the Biblical canon were not closed, we would not be able to do the work of Biblical interpretation, for we would have nothing to protect us from completely going off the rails.

I tend toward the courier side of things because it is the nature of my personality to deliver. It is also in my nature to question whether boundaries are in appropriate places, or whether we’ve just marked the lot at the corner of the driveway because that’s how it was marked when we moved in. But that's my personality. It is a reflection of the way God made me, but it does not stand in opposition to the way God made you.

I wonder: if much of my own understanding of what it means to be an evangelical is driven by the makeup of my personality, how much religious infighting is just personality conflict masked as Truth?

In other words, what if we're both wrong, and the missing ingredient is actually humility? 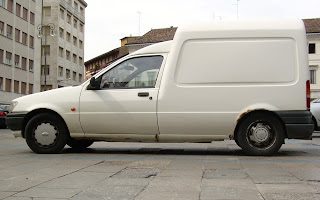