It's a shame that we have so narrowed the word "orthodoxy" in this way, for orthodoxy is a gift from God to the church. Orthodoxy, broadly defined and broadly understood, holds us together as believers in the triune God, such that we celebrate one church, one Lord, one baptism. Orthodoxy ties us to the early church creeds, so that more than simply being on the same page, as it were, we may be in mystical communion with one another, and with God. In the Nicene Creed (part of our doctrinal heritage as Christians, and printed in the United Methodist Hymnal), we declare:

We believe in one holy catholic and apostolic church.
We acknowledge one baptism
for the forgiveness of sins.
We look for the resurrection of the dead,
and the life of the world to come. Amen


Orthodoxy, then, is about connecting us in one church, not about dividing us. It is certainly not about picking one issue to be the plumb line of faithfulness: particularly an issue not mentioned in the Creeds.

It has been absolutely remarkable, then, to watch the speed at which we've seen the term "orthodoxy" turn into something it has not traditionally meant. This narrow funneling of the term does not do justice to the wideness of God's mercy, nor is it faithful to the rich witness of the Bible. I will acknowledge the necessity of using Biblical interpretation to arrive at a position of full inclusion (more about this in a bit) but I will not cede that I am unorthodox. Never mind the fact that the ancient creeds don't actually mention the Bible; I see nowhere in the ancient beliefs about the Triune God where an argument about full inclusion of LGBTQ people stands in opposition to what the great councils of the church discerned to be good and true about Christianity.

I do not want to put words in the mouths of those who use the term "orthodoxy" to describe an opposition to full inclusion, but when I hear this term in this context, I find the speaker often actually means that he or she does not believe that God does new things outside of the knowledge base of those who wrote the scriptures under the inspiration of the Holy Spirit.

The problem with this argument is that this is never what orthodoxy has meant! Orthodoxy, throughout history, has meant a devotion to first principles of Christianity, in particular the creeds. Even G.K. Chesterton, the great Christian apologist, noted that "when the word 'orthodoxy' is used [in his book of the same name] it means the Apostles' Creed, as understood by everybody calling himself Christian until a very short time ago and the general historic conduct of those who held such a creed."

Nor is orthodoxy, understood in a Wesleyan context, anything resembling what we have warped it into, in the context of our debates over sexuality. We certainly believe scripture to be primary--in this way, I am an unabashed evangelical!--but nowhere in our founding documents do we pretend that God only speaks through scripture. Those who conflate "orthodoxy" with opposition to full inclusion sometimes point to the fifth Article of Religion of the Methodist Church, "Of the Sufficiency of the Holy Scripture for Salvation," as guiding their understanding that no truth exists outside scripture. But read the article for yourself:


Not only does the fifth Article of Religion not say that scripture contains all that is true about God, but it implicitly acknowledges that new truth may be discovered outside the scope of scripture, even as it declares that nothing necessary for salvation is found outside of scripture.

Relatedly, those who argue that orthodoxy stands in opposition to full inclusion say that the Biblical witness is clear, and that those of us who argue for the acceptance of the practice of homosexuality within married, partnered relationships are privileging experience above scripture. The argument goes that the problem with the so-called Wesleyan Quadrilateral is that we misunderstand the role of experience within it. Experience, then, is not about saying "I experience something else to be true, so the Bible must be wrong," but rather, "I live out the Biblical witness in my experience." Let me be clear: I have no problem with this critique of the quadrilateral! So often, in this individualistic culture, the only thing that matters is my own experience. Church, I believe, calls us to understand experience much more broadly.

Thus, I must necessarily interpret scripture when I read it. There is no other way for me to be faithful, as scripture cannot simply be implanted into my brain. It must pass from the ink on the page, through the air, into my eyes, through my optic nerves, into my brain, where it co-mingles with everything else lodged in there. You read scripture the same way. I pray that I may discern God's will through the scripture, but the very existence of the step between the writing of scripture and its presence in my brain--namely, my reading and comprehending it--means that scripture must be interpreted. To pretend that there is no interpretation necessary, as many fundamentalists do, is to miss the fact that those of us who read it tend to be human.

It is simply impossible to not interpret the Bible! We may disagree over the interpretation, but interpretation is a necessary part of following Christ, honoring scripture as primary, and expressing faithfulness to the historic creeds of the church. These are necessary practices in the service of maintaining orthodoxy, and they can lead to disagreements about how God is calling us to live in the modern world, but those disagreements do not necessarily mean that one side is faithful and the other is willingly otherwise. In other words, when people conflate orthodoxy with belief about a single issue not mentioned in the Creeds, what they seem to be doing is subverting the historic meaning of orthodoxy so that they may control what it means.

I cannot speak for all who believe in full inclusion of LGBTQ persons in the life of the church, nor do I mean to put words in the mouths of those who cry "orthodoxy!" in these conflicts. If I am demonstrating unorthodoxy in terms of what "orthodoxy" has always meant (that is, being in agreement with the historic creeds of the church), I am open to being called out.

But if we are going to have this discussion--and it is time to have this discussion, Church--let us at least be fair with one another and refrain for assuming that everyone who disagrees with my position  or my side is, by definition, a heretic. That kind of argument has not exactly been good for the church throughout the centuries. 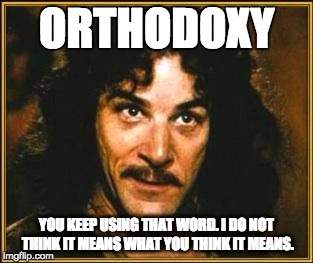