General Conference is Incompatible with Christian Teaching: This Post is Probably Not About What You Thought It Would Be About #umcgc #umc

Every four years at the General Conference of the United Methodist Church, the issue of human sexuality gets the most play in the press. The Book of Discipline of the United Methodist Church declares the practice of homosexuality "incompatible with Christian teaching." Furthermore, "self-avowed practicing homosexuals" are not allowed to serve as clergy, and clergy are not authorized to perform weddings for same-sex couples. It is a difficult disagreement, to say the least.

Sexuality gets the most press at General Conference, and we are stretched to our breaking point by this debate, but different understandings of sex are not what is breaking us apart. Oh, this conflict sometimes gets framed as something more basic than sex, which is to say we have differing understanding of scriptural authority. But even then, scriptural authority is not what is breaking us apart, either.

For there is one more thing which the Book of Discipline declares to be incompatible with Christian teaching, and that is war. War, the Discipline says, "is incompatible with the teachings and example of Christ." As Christians, we are called to "love our enemies, seek justice, and serve as reconcilers of conflict" (emphasis mine).

War, of course, is what happens when diplomacy has failed. It's winner-take-all. It conquers rather than compromises. It leaves little room for negotiation. It just wants to win. In war, there is no way to win without the other side losing.

And call me crazy, but does this not sound a whole lot like General Conference?

Again and again this week, I have heard people talk about winning versus losing, as if what we were doing this week was warring rather than conferencing. "Oh, that side is just upset because they are losing." In the context of church work, friends, what in Heaven's name does this even mean?! When we are trying to discern God's will and do the faithful thing, how can we possibly talking about winning or losing? Did I miss the part of seminary where they talk about how there are only winners and losers in God's kingdom? Isn't faith about something more?

When we gather according to our traditional battle lines, there seems to be absolutely no room for flexibility. "If I am to win, you must lose." As an example of this, Chris Ritter from the Illinois-Great Rivers Conference shared a blog post the other night about how sad he was when his side won debates in the Judicial Administration committee. Now, I'm incredibly grateful to Ritter for everything he is doing to find ways for us to remain together as a denomination. Seriously, y'all: the sheer weight of the legislation he's written could break the back of a camel, and I have very high respect for him. In his post this weekend, though, he described what it felt like for his "side" to "win," through votes in his legislative committee. I want to quote a whole paragraph:


I feel no joy even though we accomplished much of what those of us under our particular steeple felt we must do in order to restore integrity. The fact that we are playing a zero sum game was obvious as I spoke with several from the other side.  They are deflated.  Their steeple could only gain by taking something from mine and that didn’t happen today.  But the game is far from over.  If they stage a coup, my steeple could still lose.

I appreciate the empathy, but I will be honest: I simply don't understand the argument here. It's not that I don't see what he is saying. I just don't understand why there can't be room for both of us--"both steeples," as he might say--to be in the same church, even with different understandings of church. Why is it that at General Conference, the only way anybody can feel like they are being faithful is for one side to get 100% and there other side 0%? Why must you lose for me to win?

So often, the argument is framed as integrity; if we say we're going to do something, the argument goes, I am harmed when you don't do it. But why? Why do those opposed to UMC clergy doing gay weddings have to absolutely nail those clergy who do them, in order to feel like they've won? Why must we view every election to our boards and agencies as a zero-sum game where winning is what matters and compromise is a dirty word?

I don't mean to make too much of this metaphor, but what I am describing--what I have witnessed this week from all "sides" of many issues--this is not conferencing. It is war. Conferencing is about finding God within our work, about seeing where we disagree and looking for God in the space between us, praying we are brought closer and knit together in love. War is about winning and losing, and hopefully just winning.

I also don't mean to belittle actual war, nor the violence done to many in the service of actual war. Obviously, General Conference will not come to this, and thank God.

But if war is the only other thing the Discipline deems incompatible, just what is it about war that makes it incompatible? Beyond the physical violence of the thing, war blinds us to one another. It does not allow for us to look for God in the space between us; so often, war literally blows up the space between us, such that by the time we're done, we're less likely to find a connection between us than a crater.

War also causes us to commit murder in the sense that Jesus talks about murder in Matthew 5, which is to say that when we are angry with our sisters and brothers, we cease seeing them as fellow children of God, fellow heirs to God's kingdom. In other words, when we are more concerned about winning at all costs than we are in honoring the image of God present in each of us (and acknowledging that there are some things about which we might be wrong!), we essentially murder the image of God which resides in the other, so that we see them less as fellow children of God and more as barriers that stand between us and that-which-we-want.

When there is no room for compromise--when winning is predicated on the other side losing, or said another way, when doing church is predicated on winning--there's no chance for progress. Nor is there change for unity. When we bring our legislative and tactical tanks and grenades to General Conference, the only question is who will be the last person standing after all the bombs have gone off. This is no way to win, and it is not much of a victory anyhow, for the collateral damage is going to be a nightmare.

This dynamic is why I am praying, deeply praying, for the work of our Bishops. If there is a solution to this morass, it may well come from our spiritual leaders. Our polity may not do much to honor them, nor their gifts and graces for leadership, but our Bishops have the unique perspective of standing above the battles (sometimes literally) and having a wider view. If we are to experience Christian unity, whatever that phrase means these days, it may come from those veterans who have been in the fight. After all, if you want to find someone viscerally opposed to war, go talk to some Generals. They'll tell you that war is hell, and that it is to be avoided at all costs.

Scripture tells us that we will hear of wars and rumors of wars, but that we ought not be alarmed. The end--the Resurrection and Reconciliation that comes through Jesus Christ--is still to come. The birth pains are real, but they are a necessary part of new birth. And for as scary as it might be to do a new thing, the Markan narrative continues, while we wait, we are not to suit up in order defeat "the other side" in battle, but rather to preach the gospel to all nations.

Friends, this is a worthwhile agenda. Therefore . . . well, you know. 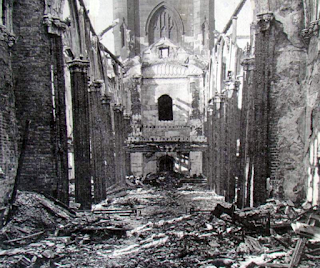