I got called up to the big leagues yesterday with a one-day contract. With some of our delegates out of town at family graduations, and another delegate under the weather, the head of our delegation called me over first thing yesterday morning and let me know that not only would I need to sit in to replace a delegate that morning, I'd need to do so all day. After worship and plenary, I would sit in the Conferences committee as the committee dealt with deciding whether to send legislation to the floor about denominational restructure. 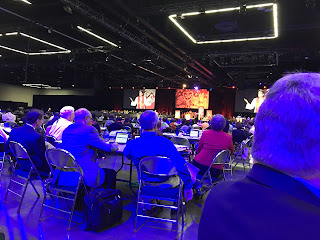 So I sat. And let me tell you, I felt something very visceral yesterday as I walked past the bar of the conference and took my place at one of the tables designated for the North Georgia delegation: there's a lot of power at that table, in that voting bar, in those committees. In our polity, the General Conference is the only body that can speak for the church. And in the United States, it is the only body that can change church teaching and structure. To be a part of that discussion--and, indeed, to be one who decides--is to participate in a very powerful act with very few controls, beyond a few Constitutional provisions and a fair amount of systemic disfunction.

I don't want to make too much of this, but I did not expect to feel quite the way I did in those discussions. It's bewildering, trying to keep up with complicated matters of theology and practice, and then to have a say in whether they become church law is quite humbling. When I agreed to "run" for General Conference (in as much as we run, anyway. Really, what I mean to say is that when I agreed to not turn down an election), I didn't quite realize what it feels like when you're in the room, making the decisions, making the votes. I only sat in for a day; I can't imagine what it feels like to do this for two weeks. 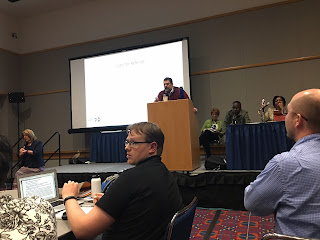 I am also beginning to understand the desperation some people feel when they aren't able to get traction for any of the issues about which they care. As someone who feels passionately about church restructuring (I know, not the sexiest topic), it was meaningful for me yesterday to be able to vote on a number of restructure proposals aimed at increasing flexibility in the church and helping us create a path forward. But none of the proposals related to church restructure passed. Not one. Unless there is action on the floor of the General Conference to reanimate one of these petitions, there will be no restructure, no way forward for flexibility on matters that are unique to the United States. And, friends, I wanted to bang my head against the wall. I wanted to stomp my feet and pound my fists and yell, "If we don't change, we're going to die!" Basically, I wanted to act like a baby. 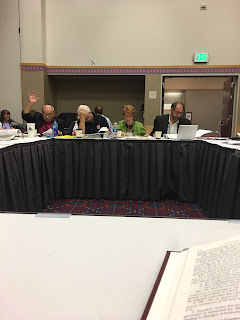 But the thing is this--and this says more about me than anything else--I feel so passionately about this issue that it is often really difficult for me to abide anyone not seeing things my way! And yet, while I am quite certain we've got to change, just because I am clear in my own mind about what that change should look like does not mean I am right. But if I am honest, I will admit that I really like to be right!

I know I am not unique in this reaction. I see it play out on the floor of General Conference again and again. And it seems to me that this unique combination of passion and power can mold a person in one of two ways. Either a delegate is confirmed in her humility, remembering her worth ultimately comes from her relationship with God and not from her power, or he learns to play the game in craftier and more insidious ways, caring less about tactics and more about getting his way.

In the final analysis, every General Conference is consequential. It's just the case that the biggest consequence may be in how it reshapes not just the United Methodist Church, but the delegates who are involved in its reshaping.
Posted by Dalton at 9:38 AM