We finally got underway yesterday, after two-and-a-half days of wrangling over the rules. Once we finally dispensed with Rule 44, the General Conference was able to break up in legislative committees and start the work of plowing through legislation.

The committee I'm sitting in on this week, Faith and Order, has divided itself into two subcommittees: Doctrine and Ordination/Praxis. Each piece of legislation assigned to Faith and Order is, in turn, assigned to one of those subcommittees. The subcommittee, using its own version of Roberts Rules, goes down the list of legislation, one at a time, debating, amending, and, ultimately, deciding whether to deciding whether to support each petition. This process takes some time, as you can imagine, and can be a little messy. 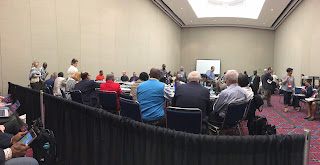 The challenge, for those of us who are reserve delegates, is how to observe what is going on in subcommittee, as this work happens around tables rather than from the dais, meaning that there are no microphones used, and translation happens with someone speaking into the delegates' ears, rather than through the headsets as usual. Different committees deal with this dynamic in different ways. In Faith and Order, thankfully, Bill Arnold (the chair) helpfully arranged the subcommittees in different corners of the room and then extended the bar of the conference so that we were able to hear most of what happened, including discussion about various petitions and the action taken.

After several hours of this work, the committee came back together to take action on legislation as a full committee. Quickly, the complexity of the work before the General Conference was clear. Several petitions, passed unanimously in subcommittee and without controversy, had to be tabled in the full committee because another committee somewhere along the line had amended language relevant to the petition, and the group had to wait until there was clarity on the new language. Even so, Faith and Order got through several petitions yesterday to be added to the consent calendar for General Conference, likely to be voted on next week (because Rule 44 did not pass, the calendar is completely up in the air as of this morning, so we should have a better idea soon when all of the voting will take place).

One aspect of this process to remember is that just because a petition doesn't pass at the subcommittee level doesn't mean it dies. The full committee votes, and if a petition doesn't pass but has at least 10% support, those in favor can file a minority report which can also lead to legislation appearing on the floor of General Conference. There are other legislative tricks, too, so that legislation can find ways to appear on the floor later in the session even if the legislative committee doesn't act on it the first week.

In other words, as it relates to the rules of order, it's Robert's world. We're just living in it. 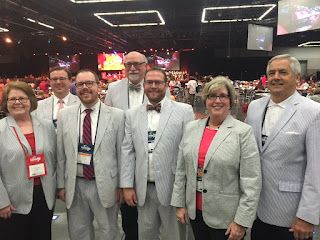