Day 1 of General Conference is in the books, and we're already behind schedule. To understand why, you've got to understand some of the dynamics at play behind the scenes.

When you arrive at General Conference, you're thrown into a system full of hundreds of people you don't know. You're expected to do business with them, work with them in committee, push and pull and occasionally tangle with them, but what seems impossible for people to do--with some good reason--is to trust them. I certainly understand some of the reasons for the lack of trust; besides the fact that it is hard to trust people you've just met--and, in many cases, whom you'll never see again after the close of General Conference--there have been a number of power plays and shenanigans throughout the years. We have, at times, behaved in less-than-holy ways. So you can understand where some of this lack of trust comes from.

If that lack of trust comes from the Ghost of General Conferences past, it is made manifest in the debate over the rules that will guide our time together. In other words:


Where there is low trust and high anxiety there will be lengthy discussion of rules #gcumc
— Tom Berlin (@RevTomBerlin) May 11, 2016


And this is what we did. The General Conference spent all evening debating the rules, such that while we were scheduled to adjourn at 6:30pm, the presiding Bishop had to call for a recess so that people could eat, and then we all marched back into the main hall at 8am to further discuss the rules. It was maddening.

If disciples were made through making, amending and challenging motions, #UMC would be killin' it #UMCGC
— Matt Miofsky (@mmiofsky) May 11, 2016


Now, the rules matter--and they matter a good bit. If somebody doesn't like the way a legislative matter is treated later in the session, you don't want them to be able to point back to the rules and say, "But you didn't do what you said you were going to do." So we went in depth and talked a lot about the rules: particularly Rule 44, a proposed rule that would remove agenda items related to human sexuality from the normal legislative process and craft a new discussion and consensus-building model to deal with these petitions. It's a controversial rule, with a number of people (including many in my own delegation) saying it's unruly and improper for General Conference, and others arguing that this kind of decision-making process isn't authentic Christian conferencing. I'm in favor of the Rule 44 approach, mostly because I'm willing to try anything once, but I understand the concerns. The Conference ultimately decided to punt on 44 until tomorrow. We'll discuss it in the morning.

And while the rules matter, what drives me batty is the constant use of Roberts Rules to delay, to disrupt, and to argue. We do these things well as Methodists. A number of times, points of order were so nonsensical that I had to turn to my neighbor and ask, "Wait, what is he trying to say?" And while it took us hours to sift through these parliamentary inquiries, with the exception of removing Rule 44 so that we can talk about it tomorrow, the Conference ultimately changed . . . absolutely . . . nothing. They passed the rules as written. It was not an auspicious start to our time together.

Thankfully, rules debates aren't the whole shebang. Conference opened with a remarkably powerful service of worship, in which the bishops spread out all over the main hall and served Communion. Remind me to alway stay within sight of Bishop Peggy Johnson whenever we sing. She may have been my favorite thing about General Conference today, as she danced and signed along with the music.

It was not a day without speed bumps. The new delegate orientation session started 45 minutes late because, well, they forgot to find a speaker for it. The lights in the main hall are broken and working at, maybe, 30% capacity. Sound and video issues cropped up every now and again. A protest during Communion, while born from a good place, demonstrated a deep divide in our understanding of the Open Table.

But despite the speed bumps, I am starting to find my hope. I watch talented clergy and committed laity lead the church, I watch Bishops demonstrate love for God and neighbor, I sit and joke with colleagues who have poured into me more than I can say, and I remember that even when things feel the most stuck, God is at work. 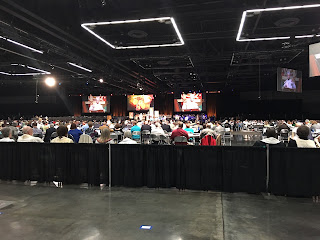