"Clarity" in United Methodist Theology: a Necessity or a Tool for Takeover?

The 2016 General Conference of the United Methodist Church is two weeks away. Predictably, the issue of human sexuality has received top billing; in the meetings of the delegation from North Georgia, of which I am a part, this issue has been discussed more than any other. I have written about this issue a number of times; it is indeed an issue about which I have strong feelings.

In the name of creating theological clarity--in many ways, a noble task--several pieces of legislation threaten to dramatically remake the church in the image of those writing the legislation.

Such a goal is never explicitly stated, of course, but the goal is woven throughout multiple pieces of legislation. Take Dr. Bill Arnold's rewrite of "Our Theological Task," for instance (60676-FO-¶105-G). In the preamble, Arnold proposes amending Our Theological Task to note that reason, tradition and experience


must be brought to bear in faithful, serious, theological consideration upon the living core of the Christian faith as revealed in Scripture, our primary authority. We turn to these three in the process of interpreting Scripture (a process known as hermeneutics), but not as independent sources of truth.

At first glance, there is nothing revolutionary here. Of course, scripture is primary. Of course, the other sources and norms are used to interpret scripture--interpretive lenses, if you will--rather than being co-equal with scripture. But this is not what is written here, and thus would be written into the Discipline. What is written is that there is no truth apart from scripture. Reason, tradition, and experience are not "independent sources of truth" in this rendering, never mind where they fall in the hierarchy with scripture.

Our Theological Task does not exist for the purpose of subverting United Methodist Doctrine! In fact, we have clear Doctrinal Standards, and while it is true that the results of engaging Our Theological Task sometimes stands in tension with the Doctrinal Standards, this tension is carefully crafted to keep one foot firmly planted on the terra firma of sound doctrine, while allowing for theological imagination in the academy and the church. We would never allow the American Medical Association to say that we already have the only text we'll ever need, primary though it is--the human body--and that anything that challenges our traditional understanding of that text is not an independent source of truth. There seems to be a movement in some corners of the church to dispense with Our Theological Task altogether, damaging our witness and moving us toward a faith that demands agreement in all things, essentials and non-essentials alike.

The proposed damage is not limited to Our Theological Task. Take, for instance, a proposal from Joel Watts (60587-MH-¶1422.3-G) to require all full-time faculty at any United Methodist seminary in the United States to

On the surface, this commitment seems fine. As clergy, I certainly affirm these doctrines. But I am a church pastor, not a professor. I know of many United Methodist seminaries who employ exemplary Jewish faculty in the area of Biblical studies. Should we fire these people, allowing seminaries to only hire three professors who refuse to sign such a statement? Beyond this, what in Heaven's name are we doing talking about requiring faculty in our seminaries--faculty who are tasked with doing theology--to sign a statement binding their scholastic work in any way?

Or take the requirement (60228-MH-¶1414.2-G), proposed by Beth Ann Cook, that all members of the University Senate--the governing body of United Methodist higher education--be United Methodist. Again, on the surface, this sounds great; of course United Methodists should drive the conversation about our colleges and seminaries. But the purpose here is more than just ensuring theological consistency. By requiring United Methodists in every single position on the Senate, we are limiting a large number of trained, accomplished higher educators to provide input on the very subject out which they are the most knowledgeable. What is more, the entire slate would be voted upon by the General Conference, which means that if the slate were not approved, you'd watch before your very eyes a takeover of our seminaries on the floor of the General Conference.

I do not mean to make more of this danger than necessary; I do not have a significant sense of how successful these proposals are likely to be. Neither do I mean to argue that there is some shadowy coordinated attack afoot. But I would note that while the gate of General Conference petitions is (necessarily and appropriately) wide, I did not randomly pluck these petitions from the Daily Christian Advocate. Each of these petitions was written by a prominent United Methodist leader: Bill Arnold chairs the Biblical Studies department at Asbury Seminary; Beth Ann Cook is a member of the board of Good News, a conservative renewal movement; and Joel Watts is a prolific blogger.

Finally, let me widen my focus a bit and argue that my problem with all I've listed here is not even necessarily theological; while you might quibble with my belief in the legitimacy of committed same-sex partnerships, you'd be hard-pressed to call me anything other than an orthodox Wesleyan evangelical. My problem is that these pieces of legislation, and several petitions like them, would consolidate power in unhealthy ways: power over the makeup of University Senate; power over the historic academic freedoms enjoyed within the academy; and power over Biblical hermeneutics, resulting in the illegitimacy of any interpretive lenses other than those which match the existing biases of those in power. 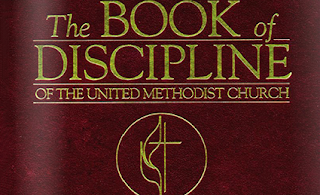