Posted by Dalton at 9:00 AM No comments:

American Christians and the refugee crisis

Of course, I get it. There's concern about the refugees coming from Syria to the United States. This concern is magnified because of the fact that a Syrian passport was found near the bodies of one of the murderers.

This is a legitimate concern. If you aren't concerned about that sort of thing, how's about inviting one of these folks to live in your home with you, sight unseen, without screening them? Of course you'd screen them first.

But--here's the thing--we do that. Well. Too well. The refugee resettlement process in the United States is remarkably restrictive. The screening process for placement in the US is painfully long; there are cases in which it can stretch into years. The Economist reports that three quarters of a million refugees have resettled in the US since 9/11 and not a single one has been arrested on terrorism charges.

For Christians, there are two relevant pieces of information to take into account.

1. ISIS involved a refugee precisely so that the west would turn against refugees. These people are literally fleeing ISIS, not supporting them. And because the Syrian refugees are ISIS's enemies, ISIS is using us as tools to keep the refugees from finding permanent homes elsewhere. We're being used. This bears repeating: we're being used.

Look. I'm scared, too. It isn't easy to be a citizen in this world, at this time, with these problems. I fear what this means for me, for my family, for my faith.

So that's all to say that I don't mean to suggest that this stuff is easy. The way of Jesus rarely is. I'm just saying, it's clear. 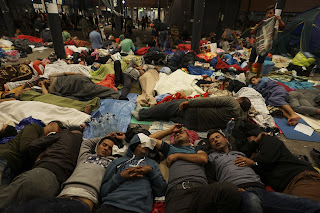 I love church people, as in I am regularly brought to tears by the depths of their goodness and generosity. But sometimes people act afool, and the pastor often gets the worst of it.

In this episode, we talk about what to do when church people are difficult, and why they deserve some grace.

Posted by Dalton at 8:36 AM No comments:

November 8 Sermon: Life is Hard, and Grace is Real


November 8 Sermon: Life is Hard, and Grace is Real from North Decatur UMC on Vimeo.
Posted by Dalton at 2:37 PM No comments:

My friend and colleague, Matt Lacey, serves Church of the Reconciler in Birmingham, AL. We have started an occasional podcast talking about our very favorite subject matter, titled "On Church."

The first episode deals with our experience of being young clergy. We love the church, both the congregations we serve and the larger connection. We want it to be better. I hope that comes through.

Posted by Dalton at 8:14 AM No comments:

November 1 Sermon: Heaven is For Real (But Most Books About Heaven Are Not)

11.1 Sermon: Heaven is for Real (But Not All Books About Heaven Are) from North Decatur UMC on Vimeo.

Posted by Dalton at 8:05 AM No comments:

Posted by Dalton at 8:04 AM No comments: