March 1 Sermon: Take Up Your Cross


We all are giving our life to something, after all. Everybody’s living in one direction or another. For Jesus, of course, it was the actual cross, it was walking to the cross and dying and then defeating death once and for all. It was showing us a better way to live, a way of love, of justice, of peace. That was the thing he gave his life to, and it quite literally was a gift. But for you, it’s probably something else. It’s probably something else. To take up your cross and follow Jesus means to take the thing you are giving your life to and giving that to God. It is to say, here is who I am and here is what I hold dear, and here is how I will use those gifts and talents and my very being to accept the freedom and responsibility God gives me to resist evil and injustice and oppression in the world. That is your cross. That is how you take up your cross. In some ways, it’s so much easier than carrying a tree up a hill, as Jesus did so long ago. But I won’t lie. In other ways, it’s one of the hardest things I know, for to carry a cross, you’ve got to have your hands free, and boy, that’s a lot more difficult than it sounds. And then you’ve got to take who you are and lay it upon the altar and say, this is my offering. This is how I respond to the gift of grace. This is how I will offer my life to Christ and fulfill my baptismal vows, to resist evil and injustice in whatever forms they present themselves. Thank God we don’t do any of this alone. And thank God that the while the business of carrying your cross is not easy, the journey doesn’t end with the cross, but with the empty tomb, with the resurrected Lord, with the victory of God. Thanks be to God. Amen. 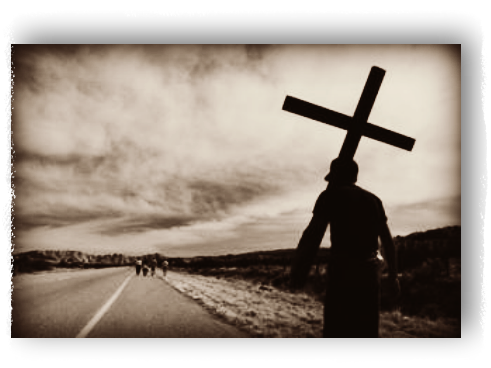