Isaiah 64:1-9
O that you would tear open the heavens and come down, so that the mountains would quake at your presence— as when fire kindles brushwood and the fire causes water to boil— to make your name known to your adversaries, so that the nations might tremble at your presence! When you did awesome deeds that we did not expect, you came down, the mountains quaked at your presence. From ages past no one has heard, no ear has perceived, no eye has seen any God besides you, who works for those who wait for him. You meet those who gladly do right, those who remember you in your ways. But you were angry, and we sinned; because you hid yourself we transgressed.
We have all become like one who is unclean, and all our righteous deeds are like a filthy cloth. We all fade like a leaf, and our iniquities, like the wind, take us away. There is no one who calls on your name, or attempts to take hold of you; for you have hidden your face from us, and have delivered us into the hand of our iniquity. Yet, O Lord, you are our Father; we are the clay, and you are our potter; we are all the work of your hand.Do not be exceedingly angry, O Lord, and do not remember iniquity forever. Now consider, we are all your people.

Mark 13:24-37
“But in those days, after that suffering,
the sun will be darkened,
and the moon will not give its light,
and the stars will be falling from heaven,
and the powers in the heavens will be shaken.
Then they will see ‘the Son of Man coming in clouds’ with great power and glory. Then he will send out the angels, and gather his elect from the four winds, from the ends of the earth to the ends of heaven.
“From the fig tree learn its lesson: as soon as its branch becomes tender and puts forth its leaves, you know that summer is near. So also, when you see these things taking place, you know that he is near, at the very gates. Truly I tell you, this generation will not pass away until all these things have taken place. Heaven and earth will pass away, but my words will not pass away.
“But about that day or hour no one knows, neither the angels in heaven, nor the Son, but only the Father. Beware, keep alert; for you do not know when the time will come. It is like a man going on a journey, when he leaves home and puts his slaves in charge, each with his work, and commands the doorkeeper to be on the watch. Therefore, keep awake—for you do not know when the master of the house will come, in the evening, or at midnight, or at cockcrow, or at dawn, or else he may find you asleep when he comes suddenly. And what I say to you I say to all: Keep awake.”
(This is the Word of God for the people of God. Thanks be to God.)
---
It is strange, I know, to come to church the Sunday after Thanksgiving and to see the halls decked and the garland strung and to hear scripture like that which we heard this morning—not gentle Jesus, meek and mild, not silent night, holy night, but a confession of sin by the prophet Isaiah, and a reading from the Gospel of Mark in which the Son of Man comes in clouds with great power and glory, and the angels are sent to gather God’s people from the four winds, from the ends of the earth to the ends of heaven. This is not the stuff carols are made of.
And yet, you know, with the all that has been going on this week as a result of the situation in Ferguson, Missouri, I sort of feel like this stuff fits. I’m not usually big on the Jesus-coming-with-power-and-Glory, God-breaking-through stuff in the Bible, because honestly, that’s just not what my life looks like. My life looks like quiet moments of grace, an act of forgiveness here, a bit of love there, an occasional minor miracle, maybe, but nothing like this. And, you know, usually, it’s enough, to feel like God is with me as I walk through a difficult time, to feel inspired to forgive, to feel God’s presence as we sing on Sunday morning as a diverse body of Christ. 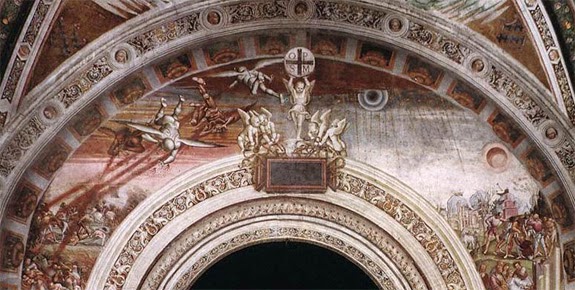 
Then, then we will see ‘the Son of Man coming in clouds’ with great power and glory. And thanks be to God. Amen.
Posted by Dalton at 12:41 PM