I want you to know I’ve chewed on that question for several years. I’m going to be chewing on it the rest of my life, I think, because I am not disinherited. I am not oppressed. And if it is the case that the last shall be first and the first shall be last, and I am already near the front of the line, what’s in it for me? I don’t know that that question has the kind of answer you can neatly tie up a sermon with, but I do have a sneaking suspicion that the answer lies somewhere in following the savior, trying to learn from and be like Jesus, the God who set aside the power and the trappings of that particular job and became like one of us. You could spend a lifetime figuring out what that means for you, that the last shall be first and the first shall be last. May you be haunted by this good, faithful question. Amen.
Posted by Dalton at 12:16 PM No comments:


And so as we prepare to pray together, let me confess something. As I have lived with this story, as I have struggled with it, I find myself just a little bit giddy at the idea that the first guy, the one who was forgiven and then wouldn’t forgive, I’m just a little too happy that in the end, he gets his come-uppance. Is there a part of you that feels this way when you hear this story? Do you like that he ends up tortured? And if so, does that say anything about you and your own need to live a life of forgiveness?
Posted by Dalton at 1:55 PM No comments:

Matthew 18:15-20
“If another member of the church sins against you, go and point out the fault when the two of you are alone. If the member listens to you, you have regained that one. But if you are not listened to, take one or two others along with you, so that every word may be confirmed by the evidence of two or three witnesses. If the member refuses to listen to them, tell it to the church; and if the offender refuses to listen even to the church, let such a one be to you as a Gentile and a tax collector. Truly I tell you, whatever you bind on earth will be bound in heaven, and whatever you loose on earth will be loosed in heaven. Again, truly I tell you, if two of you agree on earth about anything you ask, it will be done for you by my Father in heaven. For where two or three are gathered in my name, I am there among them.”
---
To be human is to have conflict, within ourselves and with others, and while this is obvious, probably, it is hard to accept, because it requires admitting that things don’t always go as well as we’d like; not all our relationships are going well; not all of our growth has happened peacefully. I was reading a piece about the poet Christian Wiman this week, who writes about faith and experience, and he says that if you believe the same thing at fifty that you believe at fifteen, you haven’t lived, and so to live is to have conflict, conflict between what you once learned and what you now experience, between who you are and who you want to be, between how you act and how others act.
This may sound weird for me to say, but I count it as one of the main reasons that I believe in Jesus, that I take him seriously, that the Bible, the primary revelation of truth about who God is and who we are . . . the Bible does not tell us to avoid conflict. So much of what passes for popular religion these days is all about avoiding conflict. Just go search the religion section in a bookstore and you’ll find all sorts of nonsense about avoiding conflict, and I think that comes from this feeling deep within us that while we all have conflict, we wish we didn’t. That’s not to say that we wish we were more wishy-washy, that we don’t want to believe things very deeply. It’s to say that we wish everybody else would be more wishy-washy and willing to change their very experience and understanding of the world to bend to what I believe, who I am, what I have experienced to be true. 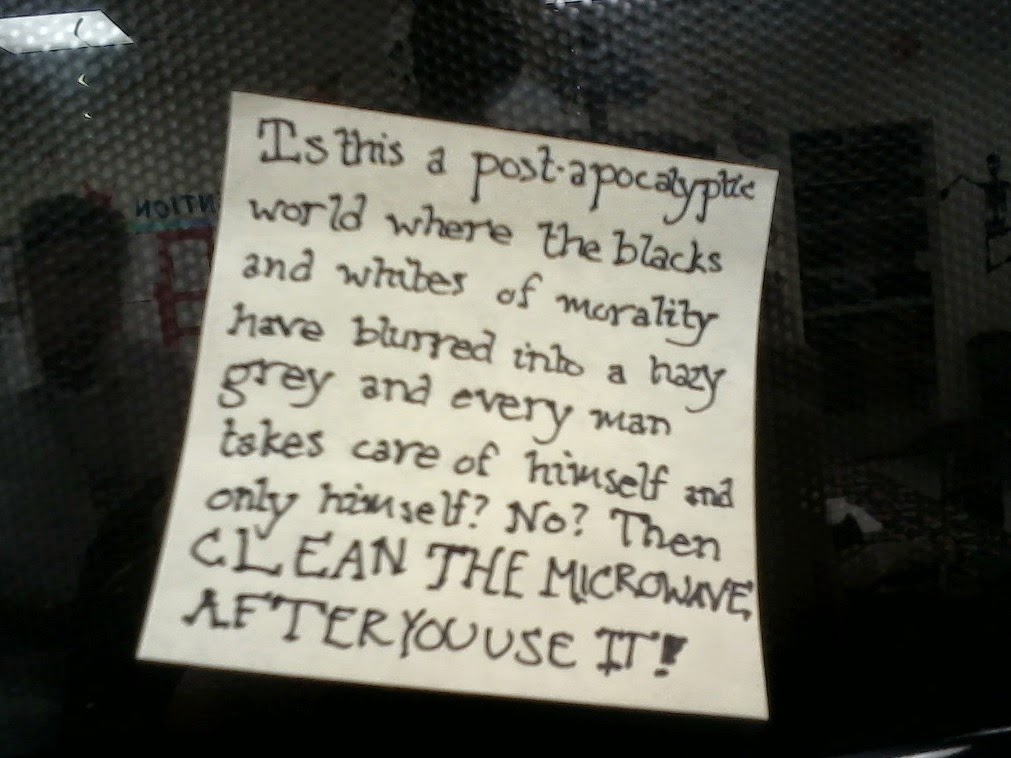 
In the name of the father, the son, and the holy spirit. Amen.
Posted by Dalton at 1:28 PM No comments:

Matthew 16:21-28
From that time on, Jesus began to show his disciples that he must go to Jerusalem and undergo great suffering at the hands of the elders and chief priests and scribes, and be killed, and on the third day be raised.And Peter took him aside and began to rebuke him, saying, “God forbid it, Lord! This must never happen to you.” But he turned and said to Peter, “Get behind me, Satan! You are a stumbling block to me; for you are setting your mind not on divine things but on human things.”
Then Jesus told his disciples, “If any want to become my followers, let them deny themselves and take up their cross and follow me. For those who want to save their life will lose it, and those who lose their life for my sake will find it. For what will it profit them if they gain the whole world but forfeit their life? Or what will they give in return for their life? “For the Son of Man is to come with his angels in the glory of his Father, and then he will repay everyone for what has been done. Truly I tell you, there are some standing here who will not taste death before they see the Son of Man coming in his kingdom.”