I have been meaning to post about our trip last month to the Chautauqua Institution, and I must admit that it has taken me some time to process the experience.

Chautauqua is an ecumenical 750-acre community on lake Chautauqua outside Buffalo, NY. It describes itself as "dedicated to the exploration of the best in human values and the enrichment of life through a program that explores the important religious, social and political issues of our times." I would echo this description by simply adding that Chautauqua is a religious, cultural, and educational Disneyland. Stacey and I had the honor of being fellows in the New Clergy Program at Chautauqua.

In essence, here is how Chautauqua works. 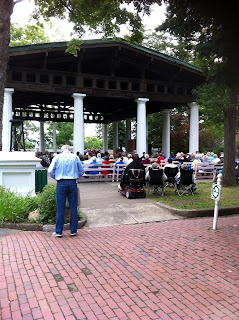 Each weekday morning at Chautauqua, there is a large platform lecture in the large outdoor amphitheater. These lectures are attended (on purpose) by a couple of thousand people who come to Chautauqua to engage in life-long learning and hear perspectives on the issues of the day. Each week of the nine-week summer season has its own theme; during our time together, the theme was radicalism. Each morning speaker offered a perspective on this topic. The speakers ranged from Dame Stella Remington, former head of MI-5, to Juliane Malveaux, former President of Bennett College (whom Cornell West called the most iconoclastic public intellectual in the United States, which is like being called the world's best painter by Picasso), to David Rohde, the Reuters columnist who spent several months as a prisoner of the Taliban. These are not fly-by-night lecturers. Chautauqua does it right.

Each afternoon, in a smaller amphitheater, Chautauqua presents a series of Interfaith lectures from a number of different traditions. We were presented with lectures from Rabbis David Gordis and Arthur Waskow, Eboo Patel (founder of the Interfaith Youth Corps) and Philip Clayton (dean of Claremont School of Theology).

Throughout the week, a chaplain guides the community life, preaching during Sunday morning worship services and morning worship each day. Our chaplain was the Very Rev. Tracey Lind, the dean of Trinity Cathedral in Cleveland. Other events fill the rest of the week's available hours. We had the opportunity, for instance, to participate in a Shabbat servive and share a Shabbat meal with Rabbi Sam Stahl, witness Jooma midday prayers led by Muslim students, attend a hymn sing (and then share a meal with!) renowned hymn writer Brian Wren, and hear the Chautauqua Orchestra play the music of John Williams on the occasion of his 80th birthday (I was good and did not pump my fist during the Imperial March). Vince Gill even showed up to play a concert during our last day at Chautauqua.

One unique feature of Chautauqua is the presence of denominational houses. Each mainline denomination has its own house (we stayed, of course, at the beautiful United Methodist House) where volunteers staff the place, providing hospitality and serving those who are present for the week. Our hosts were incredibly kind.

Because we were fellows of the New Clergy Program, we also had the opportunity to interact in small group conversation with many of the speakers, hearing their insights on ministry, interfaith work, and radicalism. This small group time was invaluable, and a real gift. I don't know many clergy (new or established) who have this kind of opportunity, to sit at the feet of leading thinkers and engage them on difficult issues.

And so we spent the week together, listening, listening, engaging, and it was a lot. I thought at the time that I needed more time to process--I still think this, in many ways--but I am thankful for the packed week, for the opportunities for learning were pretty incredible, and I did have the chance to process everything once I got home. I am not sure when I will get back up to Chautauqua (the New Clergy Program paid our considerable expenses), so this was a special time.

I'm left with many thoughts, but there are three I want to share. 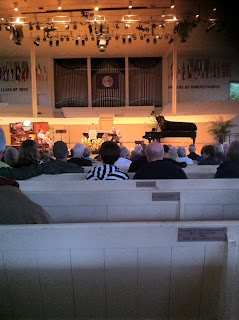 1. So much more is possible. As I sat through mind-blowing lecture after mind-blowing lecture, I kept thinking, "why am I doing such small work?" There is a temptation in ministry to simply manage, to step out every now and again. But it is also the case that I am similarly tempted to get back into line once my hand is slapped or I receive the slightest whiff of criticism. But the Gospel is so much bigger than I am allowing it to be! I am convicted that if I am to take the Gospel seriously (and this is certainly my call as a pastor!), I must also take seriously its power. I must do what I can do to justice to its power. I do not mean to suggest that I plan to stand on the street corner with a poster and a megaphone. But I do mean that I refuse to cower. There is too much at stake. Besides, it is possible to take the Gospel seriously and be successful! I have seen this dynamic at work. The notion that one must stay within one's small box is a fiction created by those who do not care to change.

Christ came offering change, and the Holy Spirit promises us that the work is not ours alone. I am convicted that I ought to take the Spirit at its word.

2. Living in community, even "enlightened" community, is not all peaches and cream. At Chautauqua, where there is this utopian notion that since we are listening to lectures on purpose, we must have it together, there are still problems. There are pockets of homophobia. There are those who have trouble thinking outside themselves. I am thinking of a woman who identified as a Jew and who spoke favorably of John Hagee, praising his work in Israel despite the fact that he would see her damned to Hell.

The most difficult moment of the week for me, and one I continue to process, occurred at one of the morning lectures. Behind the place where some colleagues and I were sitting, a man with developmental disabilities entered the amphitheater. I later saw him with a woman who I assume was his mother; I understand that they were both present at the lecture that morning. The man began to softly speak to himself, repeating words spoken by the lecture and adding his own commentary. He was not especially loud, and I doubt anyone outside our section would have been able to hear him. And as he continued, people began to turn around to stare at him with disgusted looks on their faces. Eventually, one by one, they started to turn around and shush the man, such that eventually half the section was turned around, staring and shushing. The man and his mother eventually got up and left, shooed away by the community.

I'm still processing this incident for a couple of reasons. For one, I am reminded that even "open-minded" people can be incredibly cruel. But I am also wondering what my job in that situation should have been. I certainly did not get up and defend the man. I didn't get up and leave. I just sat and steamed.

3. Ecumenical and interfaith work is incredibly important. I am United Methodist to my core, and I tend to run in United Methodist circles. But Stacey and I were the only United Methodists in the New Clergy program during the week we attended, so we were forced outside our comfort zones a bit. We lived and learned with really folks: Lutherans (my God, so many Lutherans!), Baptists, UCC, Disciples, Episcopalians, and Presbyterians. Making friends with clergy outside my own tradition was refreshing and helpful, as we learned that there is much more that unites us than divides us, and as we shared our different perspectives in such a way that a fuller picture of the Gospel and ministry emerged. 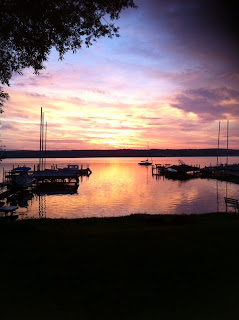 One feature of Chautauqua, though, is its intentional interfaith emphasis.  Though the new clergy present with us were all from mainline Christian denominations, Chautauqua has decided that in the 21st century, it is important to understand the world as a multifaith arena, so the Department of Religion at Chautauqua has undertaken an initiative to figure out (at a very basic level) how the Abrahamic faiths (Christianity, Islam, Judaism) can talk to one another. We had the opportunity to meet with representatives of all these religions, and I am finding myself convicted that as a religious leader, I ought to have more relationships across faith lines. What does it mean that though I have friends who are Jewish, I have no friends who are Muslim? What does it mean that I do not frequently interact with religious leaders of other faiths? There is certainly a particularity to my own religion, and I am not trying to do some kind of blending of faiths. I am a Christian, and I worship Christ without reservation. But the Abrahamic faiths share so much, and I ought to be more engaged in building these relationships. I have things to learn from other religions, and I hope they have things to learn from me. I serve in a very religiously diverse area of Georgia. I can do better.

As you can see, it was quite a week. It does my heart good to know that there is a place like Chautauqua, and when I am mired in the details of ministry, I am reminded that meaningful conversation exists. One of these days, I hope to go back and recharge those batteries, to be reminded again of what is possible.
Posted by Dalton at 7:12 AM