Stacey and I have just returned from the Chautauqua Institution, a religious, educational, and arts center on Lake Chautauqua outside of Buffalo, New York. We were both fellows of the New Clergy program at Chautauqua, so we spent all week engaging speakers (and fellow new clergy) and thinking through issues of what it means to be the church, at this time, in the places in which we serve. I will have more to say about our time at Chautauqua as I am still processing the experience, but I do want to say something about the theme of the week's speakers: Radicalism. 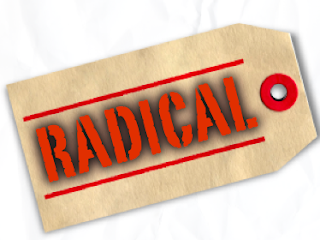 Though Chautauqua is intentionally interdenominational and interfaith, much of the talk of the week centered around the notion that Jesus was, in fact, a radical. In particular, the three rabbis with whom we had the chance to meet spoke of the radical ways in which Jesus preached things that ultimately had him executed. I should note that I am frequently skeptical of those who describe Jesus in such a way that supports one political view or another (as Anne Lamott has said, you can be sure you have made God in your image when God starts to hate all the same people you do).

But if the ethics of Christ are more expansive and nuanced than any prevailing political sentiment, I do have to admit that I am having trouble finding any evidence that Christ was not actually a radical. The execution argument is pretty solid, as you don't publicly crucify someone unless they threaten the prevailing political culture (or at least, threaten to cause trouble for those doing the crucifying). Jesus very clearly stood up for those on the outside of polite society (he called them the "least," to be precise). I don't mean to suggest that he was some sort of violent extremist, of course--that is something else entirely.

I must also say that we in the United States have done a particularly good job of turning this radical Jesus into a much more palatable figure, such that in some corners, following Christ has become about either having a large group of people verbally assent to something they don't understatnd (as is the case in many misunderstandings of the Great Commission) or about filling pews in order to keep the doors open. While at Chautauqua, we heard hymn writer Brian Wren's plea that God "stir us, amid compulsive needs/ of counting heads and filling forms/ to focus faith on Christ, who leads/ through sunny days and sudden storms." This is an important reminder. Numbers are important, but so is true faith in the radical Christ.

Being a radical is difficult. You will not always have the support of your community. In fact, if you go after the injustices that infect society, you'll be definition have segments of society poised to actively work against you. But if we are going to profess that Christ is Lord, we're going to have to wrestle with the fact that taking Jesus seriously is part of the deal.

So be a radical. Stand against those structures of injustice. Stand up for those who need love the most. Share the love of Christ with everyone you meet. Repent, and believe the Gospel.
Posted by Dalton at 8:18 AM