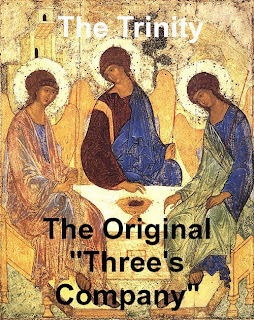 We Christians neglect our Trinitarian heritage. While I am not certain as to why we do not dwell more on the three-fold nature of God, I suspect that one reason for our (small-u) unitarianism is that trying to make sense of the Trinity will give you a mild case of vertigo.

It is much easier to think of God as one-in-one. I also have a theory that people don’t like thinking about God as three-in-one because it makes us feel too much like polytheists.

I happen to like this notion of Trinity, though—and that is a good thing, considering that I have pledged to uphold this doctrine. I like the idea that God is fundamentally relational—that just as God relates to God’s self, God relates to us. There are relationships within the trinity: Creator and Christ, Christ and Sprit, Creator and Spirit. On days when I feel isolated, I take comfort in this relational understanding of God.

There is another reason, though, that I find the Trinity to be a particularly powerful notion. Let me back up a bit and explain.

I think a lot about cohesiveness. I firmly believe, for instance, that one’s beliefs should stand up in all aspects of one’s life. That is not to say that I don’t believe in shades of gray. I do, but I also believe in integrity: that notion that you do what is right, even if the consequences are nasty.

You just cannot go through life split in so many directions. Divide your loyalties, and you’ll split right in two: just ask Ananias and Sapphira. And much of modern psychology is built upon the principles of wholeness and cohesion. You can’t live a proper life when your beliefs are stacked up against one another. It is just not healthy.

So I think a lot about cohesiveness, especially as it relates to the Christian life, and that is why I am thinking about the Trinity today, about three persons of God who represent vital parts of what it means to live in Christ. I think of the Trinity both in its historic formulation of Father-Son-Spirit, and in its theological formulation of Creator-Redeemer-Sustainer.

Second, the Redeemer. Without the redeemer, God the Creator and God the Sustainer would be creating and sustaining such a horrid bunch of self-loathing and self-destructive people that I wonder if the whole exercise would even be worth it. This is not to say that there is no goodness within humanity; Wesley taught that sin “is a malignant disease, not an obliteration of the image of God.” The fact of sin, and the fact of broken relationship, means that there must be a force, greater than ourselves, which takes that which was created and saves it, restores it to community and frees it from the bondage of selfish obsession. Without the Redeemer, we are but a wandering pack of self-reliant nomads, unable to settle down because we are unable to see our place in the great matrix of human life. In the connection that exists between humans, and between humans and the Divine, God the Redeemer shows us a better way.

Third, the Sustainer. Without the sustainer, God the Creator and God the Redeemer would create and redeem humanity, but that moment of redemption would be the last moment humanity would properly reflect the Imago Dei. As M. Scott Peck began The Road Less Traveled, “Life is difficult,” and a difficult life without a sustaining God is a hopeless place. Without hope, the Imago Dei breaks down, because God is One who continually calls us to greater things. God’s promise to be with us, even to the end of the age, means that God’s presence in the human life does not end with redemption. God sustains us, calls us to greater love and care, and lives with us. This last point cannot be oversold: God lives with us, actually.

These kinds of thought experiments are helpful only to a certain degree, of course. God is all three of these things, so to imagine God as only one or two of these things is difficult, if not impossible. But thinking theologically helps me see a fuller picture of God, and to work towards unity in my own beliefs and understandings. I cannot help, for instance, see a link between the way I’ve described the Trinity and the United Methodist understanding of Grace as coming before us, justifying us, and sanctifying us.
Posted by Dalton at 2:59 PM